skip to main | skip to sidebar

Vote or shut up?

(This is the English version of the blog I posted yesterday in Spanish.)

If the 2004 P. Diddy-driven “Vote or Die” campaign can be criticized for a sloppy slogan and design, the just-launched campaign for the youth vote in Puerto Rico, “Vota o quédate calla’o,” is equally (if not more) sloppy.

Here is a hasty transcription/translation of what the commercial says:


I didn’t know about the commercial until I read an excellent article by Rafah Acevedo in this week’s Claridad titled “Voto cuando las gallinas meen...”. The title is a play on the popular saying about children being allowed to speak only when hens pee… in other words, never. In the article, Acevedo says that, though the campaign claims to be stimulating youth to use their right to voice their opinions through the vote, in the end, the campaign actually silences young people.

I love the peeing chicken illustration and the author’s critical perspectives. Click here to read the entire article.

I’ll give the campaign the benefit of the doubt and assume that there are good intentions behind it. Of course it sounds great, that whole business about getting young folks motivated to be involved in their country’s affairs, to exercise their right to vote. But what happens when the candidates are a bunch of liars, thieves and clowns? What happens when our only option is to choose among candidates that are (to quote my currently favorite Tego song) “ni fú ni fá”? What are we asking young people to do? To be thankful for the opportunity to choose among two or three weak candidates since that is their only chance to intervene in their country’s affairs?

But that’s not true! Voting is not the only (or, often times, even the best) way to voice our concerns or participate in positive social change.

That phrase they picked as the campaign’s slogan is horrible, but an excellent example of how the campaign is misleading: “Vota o quédate calla'o.” Do they mean that not voting is like not speaking, something like “Vote or be silent”? Or do they actually mean “Vote or shut up”? (As if, if you don’t vote, you have no right to an opinion about what goes down.)

Since this campaign seems to take its cues from its “Vote or Die” U.S.-based predecessor, here are some critical approaches to the older campaign: Radio commentary by Davey D and a video featuring artists M-1, David Banner, Juvenile and others:

I confess that, if things keep going the way they are here in the States, this year (for the second time in my life) I’ll grit my teeth and vote for the president for the same reason I voted in 2004: I don’t like Democrats, but I fear Republicans.

But that is simply my (somewhat tragic) decision based on strategy to vote for the lesser of two evils. 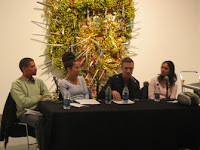 Click here to access the podcast of the panel discussion "Exploring Caribbean Popular Culture through Music" held last November 17, 2007 at the Brooklyn Museum and moderated by curator Tumelo Mosaka. I was one of the panelists, along with artist Miguel Luciano and Prof. Sujatha Fernandes. We discussed the cultural impact of different popular Caribbean musical styles, including soca, salsa, calypso, reggae, reggaetón, hip-hop, mambo, and merengue.

The art exhibit that inspired the panel, Infinite Island: Contemporary Caribbean Art, will be up at the Brooklyn Museum until January 27.
Posted by Raquel Z. Rivera at 1:21 PM 2 comments:

Not a reggaeton album... in fact, it's decidely rootsy. But it's my take on "urban."